What Do We Mean When We Say “Brand”?

What’s Wrong With How Companies “Do” SEO?

Now Over to You

Your SEO Strategy Hurts Your Brand. Here’s Why 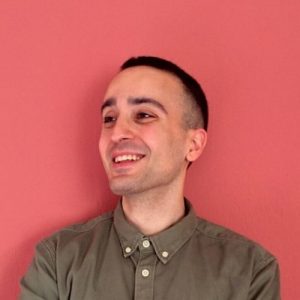 This title makes you think: “Wait a minute, SEO is a good thing. How’s it possible that it hurts my brand?”

SEO is definitely a good thing. I mean, it’s what we do for a living so we can’t really say that there’s something fundamentally wrong with SEO.

Well, it may not be something fundamentally wrong with SEO, but there’s definitely something wrong with how lots of companies do SEO. It’s not a very strong argument, I know, but if you’re hooked even a little bit by it, I advise you to scroll down and keep reading.

We hope that our ideas will help you “protect your brand” and find more meaningful ways to acquire organic traffic for your website. Let’s get started.

What Do We Mean When We Say “Brand”?

Justifiably so, when people hear the word “brand”, they think of tangible and intangible assets like a company logo, color palette, any taglines that a company uses, as well as any campaigns that the company may  be running online.

Needless to say, that’s not what we mean when we talk about a brand. We believe that the definition of a brand can be summed in the following sentence.

“A perception about a company that has been created through a series of conscious efforts on behalf of the company as well as meta associations that the company’s audience, customers, and the general public have made about the company.” 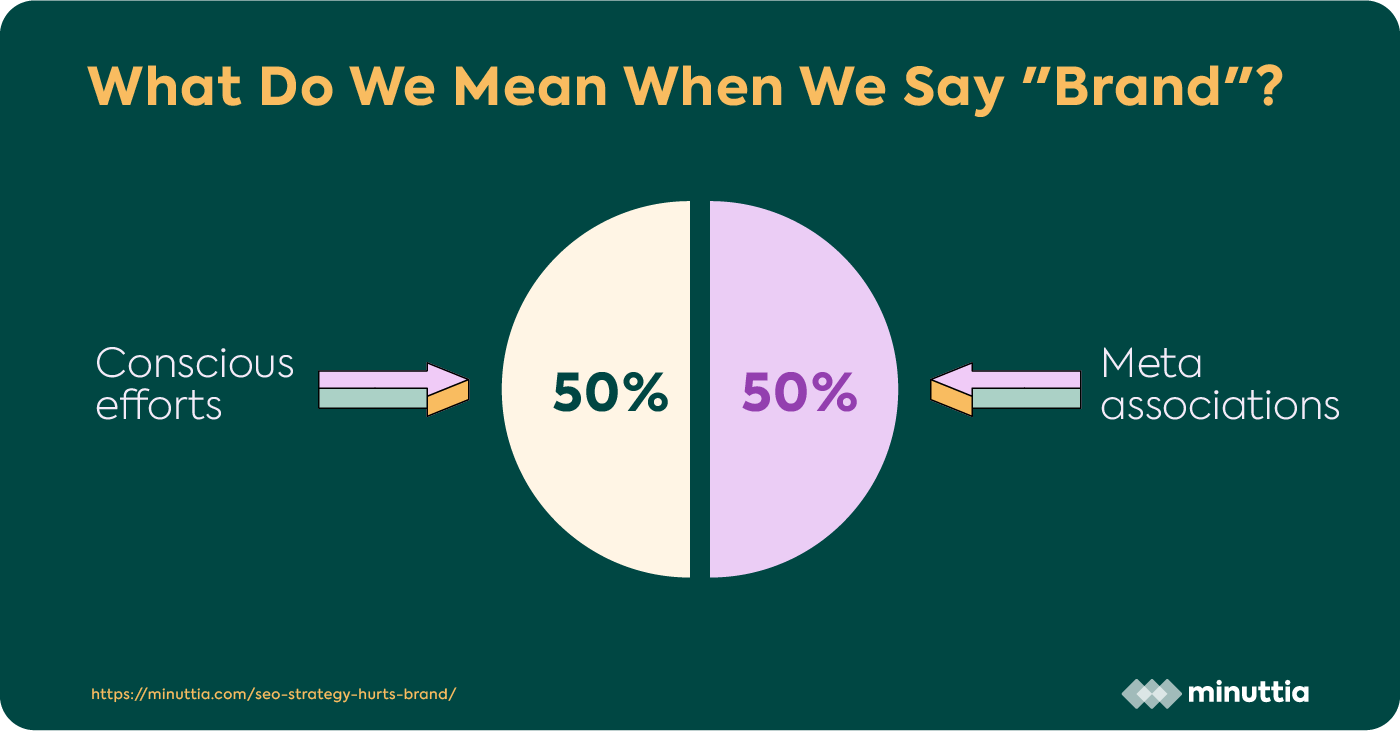 To put this into perspective, let’s use a couple of examples from different industries. First, let’s think about a SaaS company, since this is closely related to our capabilities as an agency.

One of the first companies that come to mind is Gong.io.

Full Disclaimer: Up to this day, Sun 9 Jan, we’re not using and aren’t affiliated with Gong.io in any way. We simply admire the company they’ve built and feel the need to use them as an example.

When I hear Gong.io, I have certain things that come to my mind:

These understandings and associations I’ve formed in my mind for a brand like Gong have been formed — as per our definition above — through some of Gong’s conscious actions as well as a series of meta associations I’ve made that may not have been directly connected to something that the brand has consciously done.

Examples of strong brands in other industries are:

To a certain extent, companies can control the perception that their audience and customers form about them.

As we explained earlier, these are formed through a series of conscious efforts on behalf of the company as well as meta associations that the company’s audience, customers, and the general public have made about it.

To understand how this is connected with SEO and how the latter can have a negative effect on a company’s brand and overall perception, we should first understand what’s wrong with how companies do SEO.

What’s Wrong With How Companies “Do” SEO?

The main problem with SEO is that it’s performed in the context of “rules” set by a search engine — most commonly Google.

In other words, different companies need to compete with each other for real estate on a search engine by playing with the search engine’s rules.

These companies have their own unique characteristics but when it comes to acquiring real estate on the SERPs (search engine results pages), they’re practically the same.

This “sameness” can — up to a certain extent — change the perception of the brand by search users.

This danger isn’t obvious in every case but is very prominent in several cases.

Let’s see an example of that for the B2B SaaS industry that we, as an agency, mostly serve.

For the sake of example, let’s use the term “Hootsuite alternatives”, which falls under a category of search terms with commercial search intent that’s quite popular among SaaS companies all over the world.

Here’s what we see above the fold for that term: 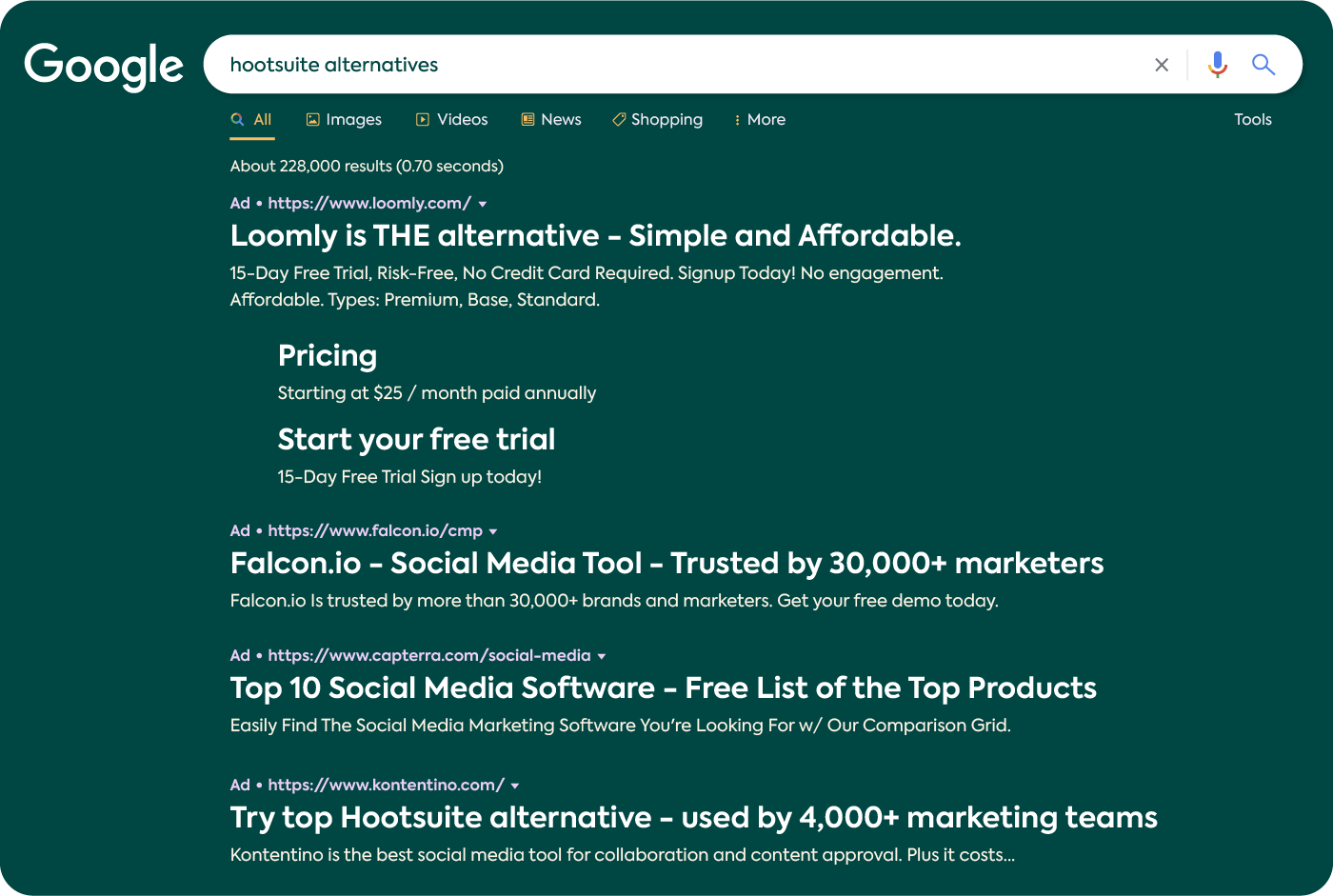 Author’s Note: The above search has been performed in incognito mode. Results may vary depending on your location and overall browser behavior.

As you’d expect, the above-the-fold area is saturated with paid results. The organic search results are pushed one screen down. As you can see below, the second screen is dominated by two SERP features, i.e. the featured snippet and the “People also ask” box. 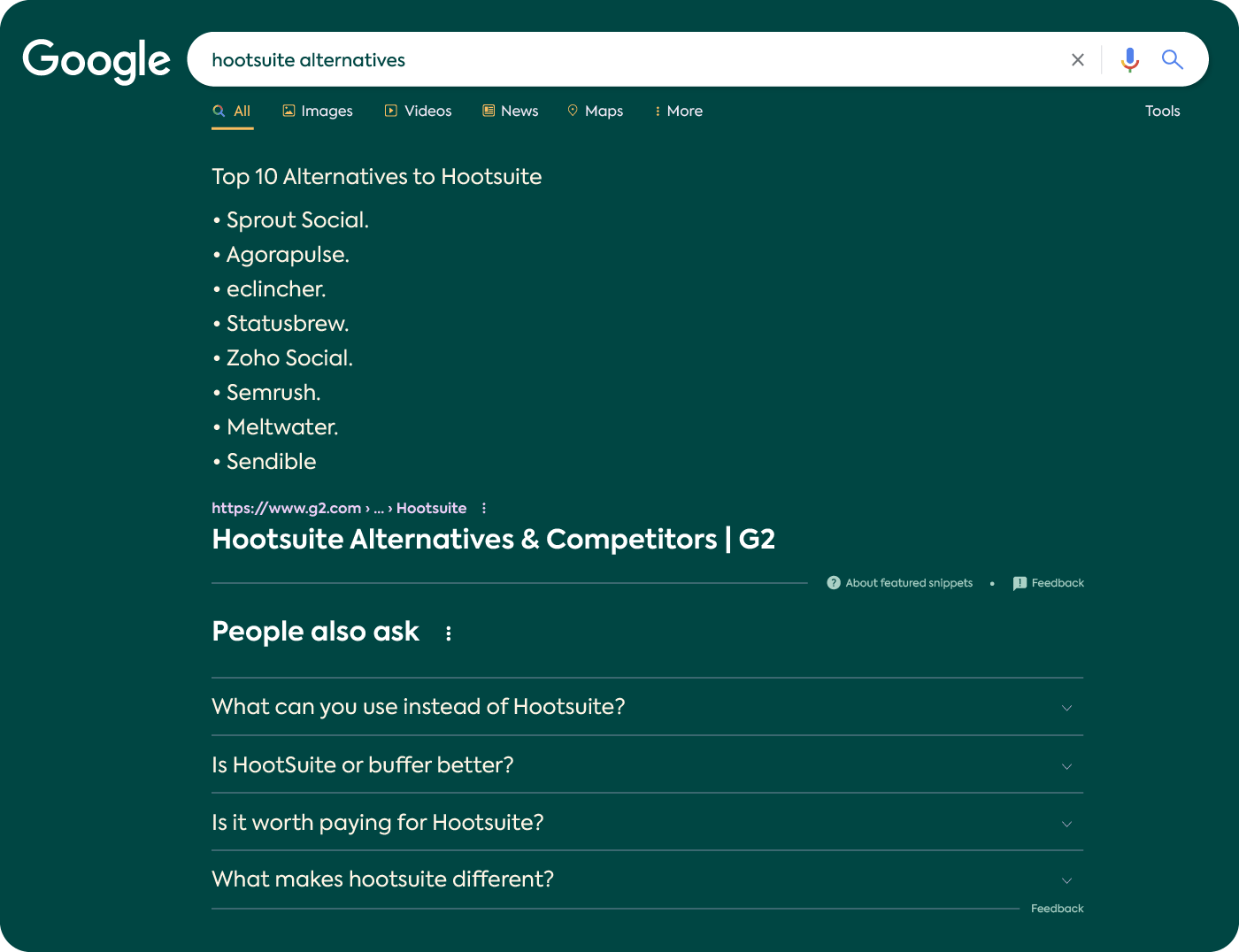 Scroll down one more screen and you’ll see the first organic search results. 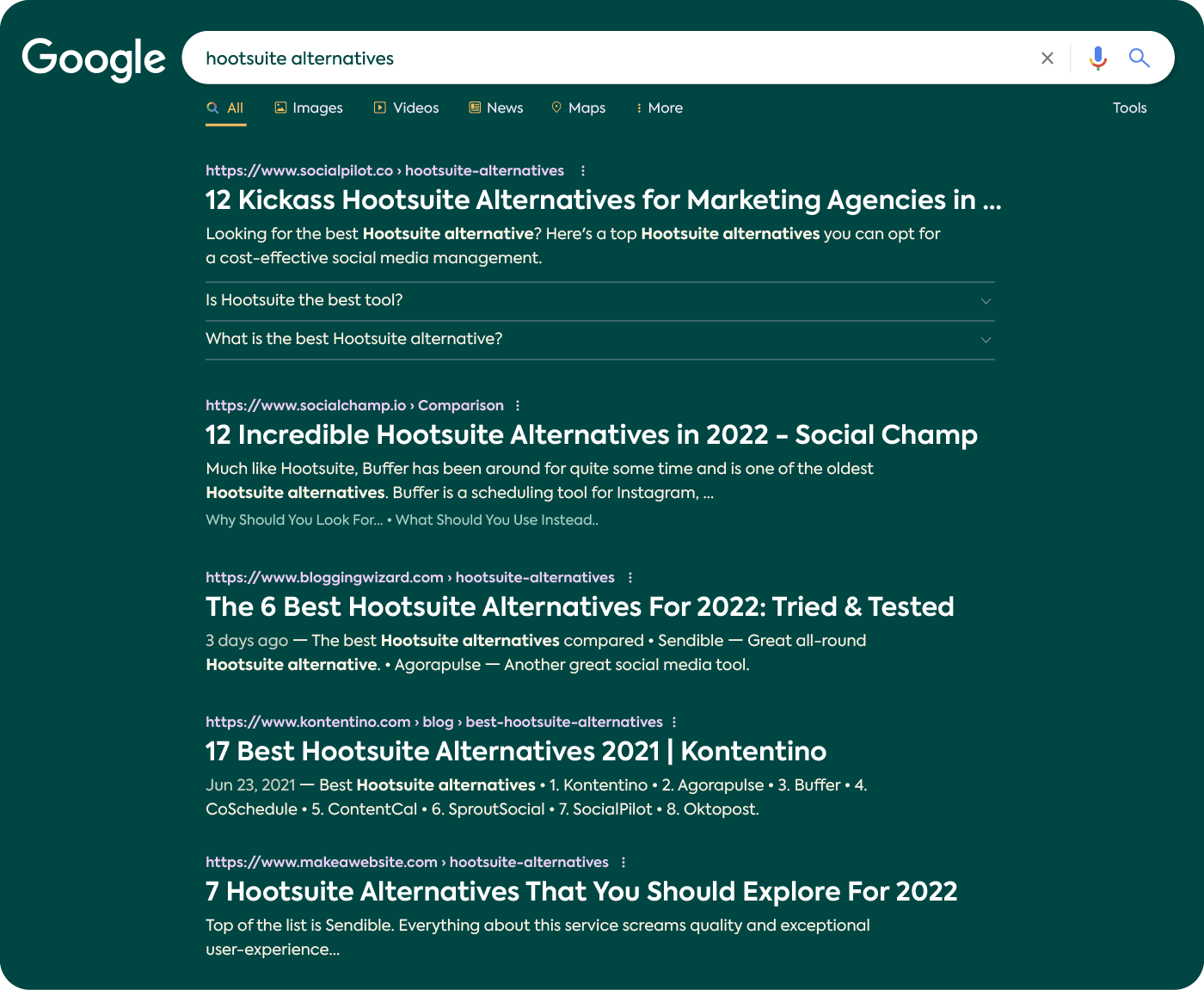 As expected, some of the results in this SERP come from SaaS companies that are competitive with Hootsuite. As a matter of fact, three out of nine results on this SERP – featured snippet excluded – come from direct competitors to Hootsuite.

The rest of the results are reviews sites which most likely earn an affiliate commission every time they send a visitor who signs up for one of the tools they recommend through their posts. Of course, that’s something we expect.

The question is: Why is this a problem and how can it have a negative impact on those sites’ brands and overall perception on behalf of their customers and overall audience?

Let’s take a step back and consider how we got here in the first place. Remember, we searched for “Hootsuite alternatives”. This means one of the following two things:

In any of these two cases, as we saw from the screenshots above, we may end up on a website of a competitive tool that is – probably – going to suggest itself as one of the alternatives to Hootsuite.

From an organic standpoint, the person or team who wrote the post did a good job.

They managed to get a visitor who’s apparently in a good stage of their lifecycle journey, close to taking an action that could be important for the company, e.g. to sign up for a free trial.

Thus, from an organic standpoint, this whole strategy looks like a success.

Even though we’re surprised about how a phenomenon like this still goes under Google’s radar – unfortunately, we’ve contributed to it as an agency as well in the past – there’s an underlying problem here.

How can a competing brand suggest itself as a viable alternative to another brand while maintaining its brand integrity?

The short answer is that it can’t. (Or, at least, if we want to be completely honest, it’s very difficult to achieve such a thing.)

Author’s Note: That’s not to say that the companies in our example don’t maintain brand integrity by creating this page rather that they (may) face the danger of doing so. There’s always a right and a wrong way to do things.

This is when a brand’s integrity can be harmed.

The same applies to paid search, of course.

In general, if we’d summarize when a company’s SEO strategy can hurt its brand, we’d say that:

A company's SEO strategy - or tactical activities - can hurt its brand when its main goal is acquiring organic visibility and traffic without caring about maintaining its brand integrity.

In general, we can say that a company’s SEO strategy is successful when: 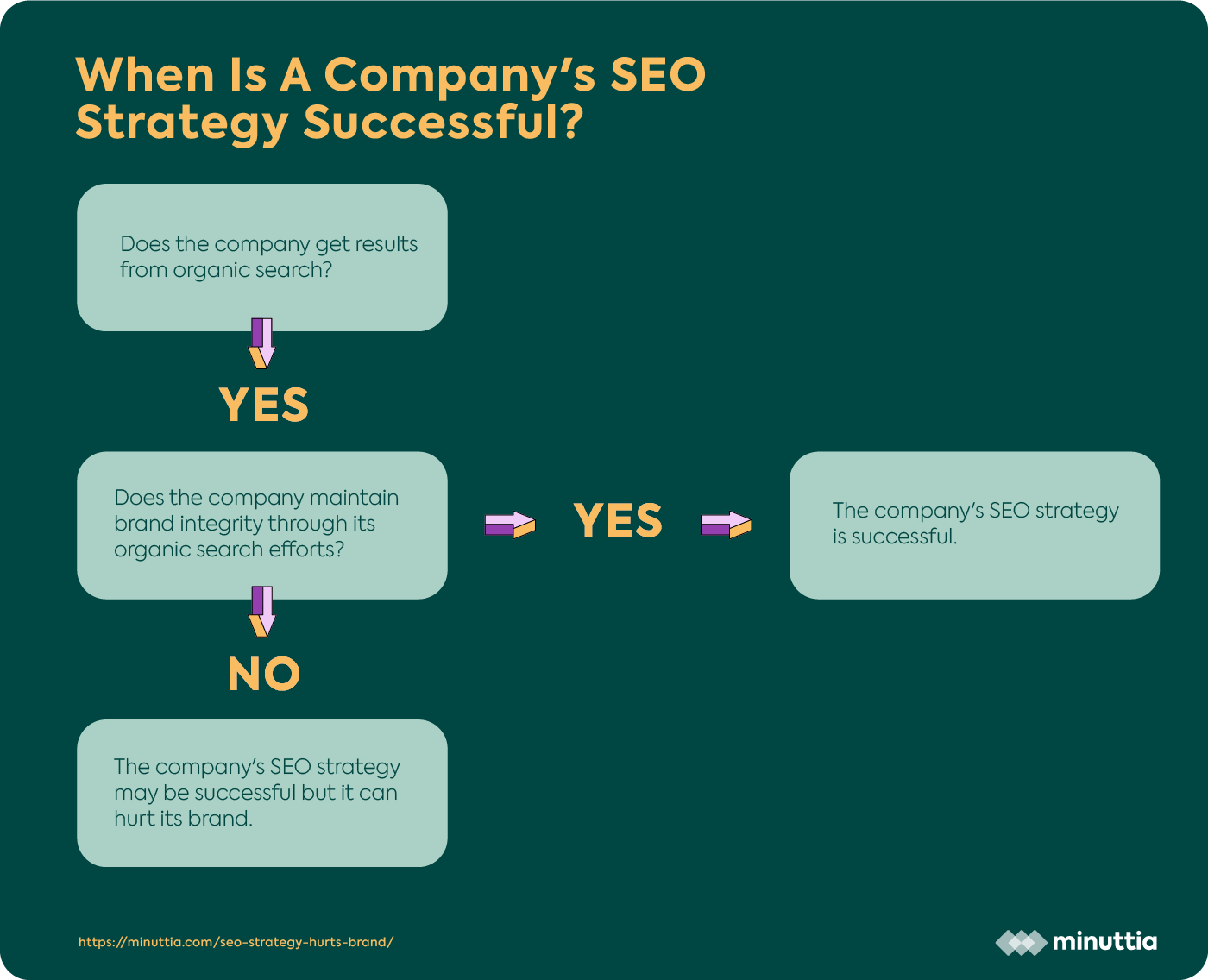 From the decision tree above, we can see that an SEO strategy is truly successful when it helps the company maintain its brand integrity.

The example we gave above may be specific only to SaaS companies, so let’s see a few more examples of bad practices when it comes to the connection between SEO and brand integrity:

The above examples, and several more, are just a few ways in which companies put their brand integrity at risk for the sake of organic clicks.

We believe that this is wrong.

Organic clicks are important, but not for the sake of your brand’s integrity.

Wondering how to achieve alignment between the two?

This is what we’re covering next.

Can you acquire organic traffic while maintaining brand integrity? The short answer is “yes”. We’d say that this should be the only way to do it. However, we know that on a very practical level, the way the game is set “pushes” SEO professionals to get results at any cost.

If there’s a cost that we need to pay, though, we’d argue that it shouldn’t be the cost of building a strong brand – a brand that can help people make positive associations and have a positive sentiment towards.

In that context and without intending to overcomplicate things, we believe that the SEO activities that are part of an SEO strategy should pass through the following decision-making process: 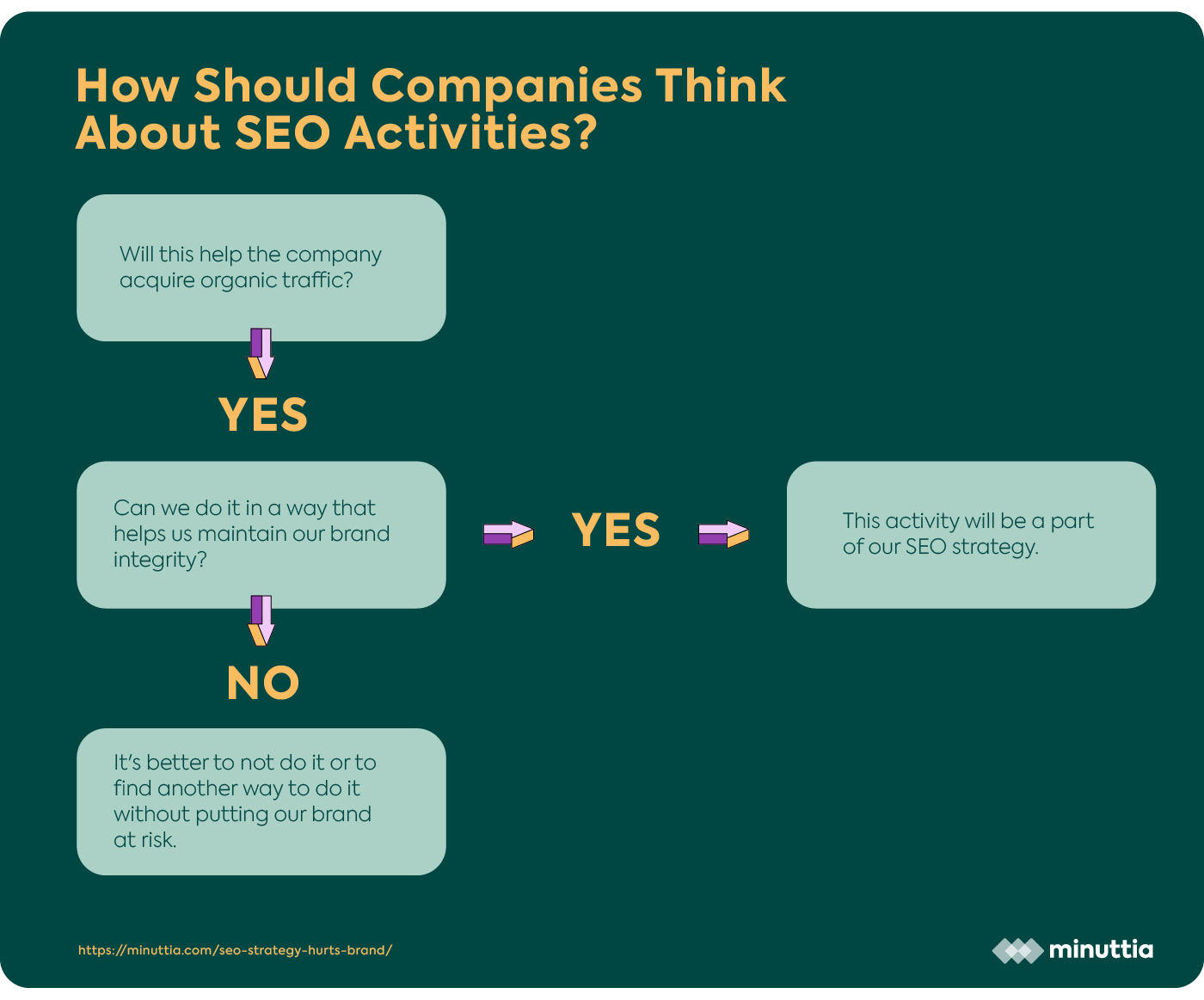 We don’t expect SEO professionals to reach a dilemma such as the one above every day while planning their SEO strategy.

We believe that the above thought process should be fundamental to any strategic decision or tactical action.

It can be a mental map, above anything else, and guide SEO professionals and their decisions on a conscious and unconscious level.

Any activity that doesn’t contribute towards building a stronger brand is an activity that should be avoided, regardless of the projected upside and impact it could have on an organic search level.

Let’s wrap this up and bring it to a close.

Now Over to You

The problem starts when our decisions are guided solely by hitting certain metrics, e.g. organic clicks, and by forgetting the big picture.

SEO can be one of the most important growth channels for many types of companies in many different industries.

It can help us raise awareness, drive clicks, and ultimately help us generate revenue.

That’s all fine, as long as it doesn’t hurt our brand in the long run.

We want to believe that, with the help of this post, you now have a guide to help you form decisions that will help you achieve your SEO goals while maintaining your brand integrity. 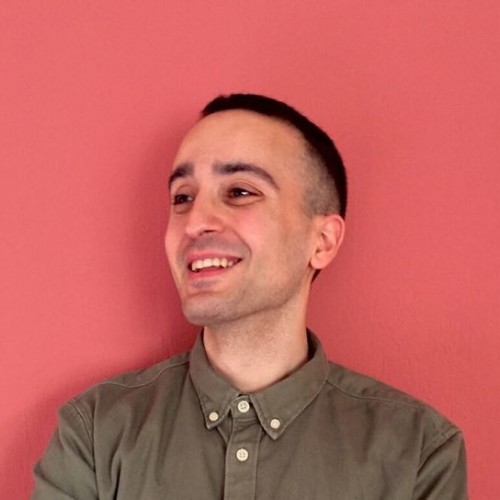 Georgios Chasiotisauthor
Georgios Chasiotis is the Managing Director of MINUTTIA, a content and SEO agency helping SaaS and tech companies drive organic growth. Georgios started out as an independent marketing consultant but was soon pulled down the path of creating an agency. The aim: build a team and scale a business by trading on his knowledge and expertise and creating successful systems and processes. That path has led to MINUTTIA, where Georgios is materializing his vision for content and SEO systems that are heavily based on strategy and eschewing short-term tactics, delivering repeatable and scalable success for companies in different verticals and of different sizes. In his free time, he imparts wisdom (read: rants) on LinkedIn or buries his head in psychology books to get down the “why” of human behavior. 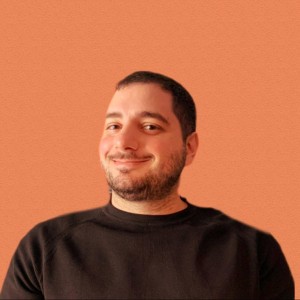 Why (& How) We Built Minuttia’s New Brand

Get informed about our new blog posts, episodes of The SaaS SEO Show, YouTube videos, and everything else we're up to.

By subscribing, you agree to our Terms of Service. You can unsubscribe at any time.